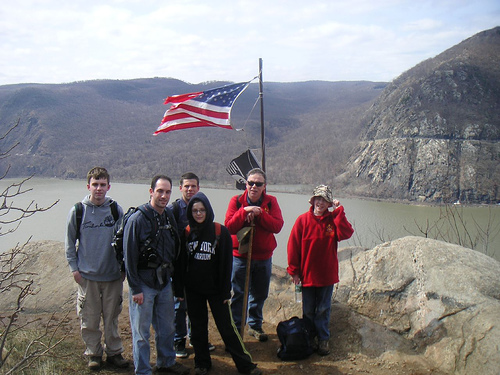 Recently a small group of mainly older scouts ventured out for a stenuous hike on the Breakneck Ridge Trail in the Hudson Highlands State Park. Although the hiking maps showed a likely steep ascent, the magnitude of the pitch was even more intimidating in its actual appearance. However, the trail was not as bad as it first appeared and about every 200 feet of elevation there was a spot for resting and enjoying the view. The trailhead begins at the Hudson River and winds its way nearly straight up mulitple rock facings until one reaches the peak at about 1100 feet. There were multiple scenic view points along the way as evidenced by numerous spectacular photographs. After lunch, our hardy crew headed back down the backside of the ridge along the Breakneck trail bypass.

Along the way, we came across a small swamp with thick reeds atop the mountain with numerous loud, chirping frogs–a unique and unexpected ecosystem that was thriving with life. The area was also ripe for major bird watching, with several different species spotted along the way. In the distance, about 3 miles to the Northeast of the top of the ridge one could view South Beacon Mountain and an abandoned watchtower, where one reportedly can view NYC, some 40 miles south. In the Hudson River below, hikers could view Pollepel Island, home of the Bannerman Castle. Francis Bannerman built a castle simulated after his home country of Scotland and used the island as a major storage facility for his highly successful munitions business. Pollepel Island has a rich history, for more information, see http://www.bannermancastle.org/history.html.

All in all, participants agreed that the strenuous hike was well worth the effort and each agreed that they look forward to a return visit. Maybe next time, our group can make the South Beacon Mountain Tower….Enjoy the pics!