In late October, Troop 353 had the privilege of camping at the beautiful campsite North South Lake. Located in the Catskills, North South Lake is full of beautiful scenery of the mountains and water—but we would not appreciate this until Sunday morning. The troop first arrived at the park early Saturday morning, after a two hour car ride. Eager to set up and go on the hike, the boys began to setup camp under increasingly harsh weather conditions.  As the scouts were constructing their tents, it started to rain and the wind coming off the lake was accelerating. This rain eventually turned into fast falling, ie blowing, snow. Temperatures started to decrease further as the boys scrambled to finish setting up in +20 mph winds while trying to stay dry and warm.  It was definitely much colder than when we left the Tuckahoe Community Center.

After a quick lunch, we drove to the nearby trailhead. We were shocked by the extreme snow storm that was occurring just outside of our warm cars.  The wind was accelerating through a funnel-like formation and blowing as much as 30—40 mph.  Reluctant to get out of the sheltered cars, the boys eventually built up the courage to huddle together and start the hike through the somewhat snowy mountains. 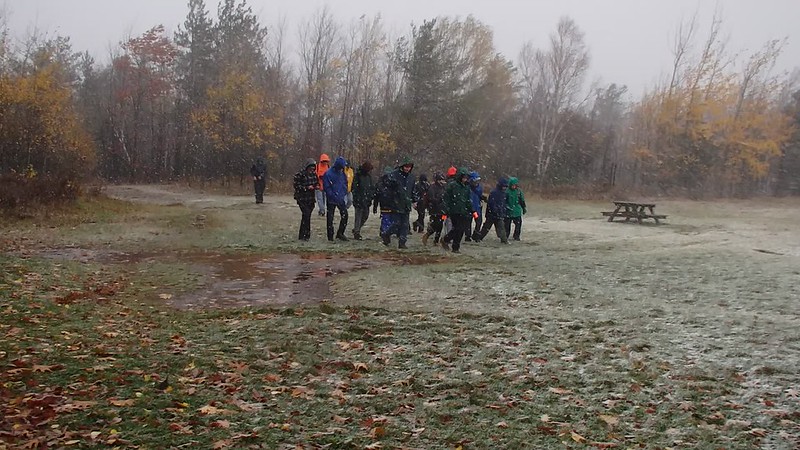 To the troop’s surprise, the wind and snow wasn’t as bad in the mountains. This was mainly due to the trees providing a nice protection from the elements. The boys stopped at various points in the steep mountains to admire the scenery, but it was near white-out conditions and we had no idea how scenic the viewing points were!   Although barely visible, the mountains and lake looked like something out of a movie–something that could only be experienced in real life.  It was brutally windy and cold.

After the hike, the boys came back to the camp to start Troop 353’s annual golden spatula cook-off contest.  Fire building was the #1 priority at that time as we were wet and very cold!  As tradition, there is a secret ingredient that the scouts don’t know about until they cook. This year’s ingredient was the tomatillo plant, a Mexican plant similar to a tomato. Three patrols took part in this event:  Dragon Ninjas / Wolverine Patrol, Phoenix Patrol, and the combined Sasquatch / Eagle Patrol

There were two parts to the cookout, dinner and dessert. The scouts competed with beautiful dishes such as a fancy macaroni & cheese and a steak plate with fried vegetables and the winning patrol (Sasquatch/ Eagle) topped it all off with a dutch oven cobbler!

After the cookout contest, the boys got ready for the long, cold night that they were about to face. The wind continued to howl and temperatures reached all time lows as the scouts tried to keep warm in their tents. Eventually they made it out alive in the morning. The morning showed hope for the boys as the sun came up and the sky was clear.  We could see snow on the mountain tops behind the park.  Temps were rising, though still freezing, and the wind was beginning to slow.

After cleaning up & packing up, we drove to the next drop off to take another hike along the famous Escarpment Trail. This hike was much more memorable for the scouts as it was warmer than the last one, and the views across the Hudson Valley were absolutely spectacular! Climbing up rugged rocks and terrain, the troop finally made it to one of the more scenic overlooks:  Artist Rock.  The sight was like none other!  Scouts looked speechless at the wonderful sight in front of them. We were at the top of the world looking down at God’s gift. The autumn colored trees topped it off.

In the end, this trip was definitely one of the troop’s best and we learned a lot about “being prepared”.  Scouts had a blast hiking the mountains in the snow and then viewing the spectacular world from on high. This is a memory the boys will definitely not forget!  We strongly encourage you to check out more incredible video clips and photos on this trip, by “clicking here”.