Troop 353 has been exceptionally fortunate in that we typically average one Eagle Scout per year and 2010 was no different!  The official guidance in the BSA’s Eagle Scout Leadership Service Project Workbook clearly states that a leadership service project does NOT need to be original but this year a scout (David Quigley) came forth with a very unique idea that our troop leaders had never seen before.   The concept was to assist community officials and other volunteer groups in a major project to assess the economic impact of the urban canopy in the village of Tuckahoe.  This type of appraisal includes a measurement and inventory of all trees that belong to the village.  To correctly assess, one has to go through training and submit evaluations on the condition of the tree & whether there is any overhead wire interference or uprooted sidewalks, possibly signaling potential economic problems during future storms.  Such ultra-green practices are cutting edge urban management strategies being deployed on a growing list of rapidly expanding cities worldwide, including 21 different cities in CA; Portland, OR; Jacksonville, FL;and more recently including Washington, DC; Rockville, MD, Shoreview, MN; Nashville, TN; Seattle, WA and several others.  More info about David’s project can be seen on the Eagles Nest page of this website. 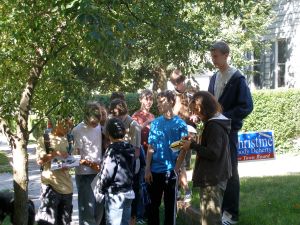 David’s accomplishments are numerous and impressive.  He held a variety of key youth leadership roles:  Troop Guide, Patrol Leader, Assistant SPL and SPL.  Not only did he manage to take on the demanding role of Sr Patrol Leader during 11th grade, but he also managed to complete a few more merit badges, complete his Eagle Scout Leadership Project while taking all honors courses in his senior year and while playing on varsity soccer and crewing for Fordham Prep.  David has a wonderful talent for successfully executing many troop activities with limited time constraints in such a way that one would believe the event had been planned for months!  I have personally known David since Cub Scouts and he has grown to be an extremely caring, capable young man and should represent all Eagle Scouts well.

Like nearly all of the Eagle Scouts from Troop 353, David’s parents were very active in our troop and Mr. Steve Quigley was the Advancement Chair for many years.  Mrs Quigley was very active in girl scouts and both of David’s sisters, Eileen & Laura completed their Gold Award.

Due to David’s very demanding schedule, even after graduation, it was a challenge to schedule his Eagle Court of Honor!  July 25th turned out to be the best available date for the Quigley family and one of the more meaningful participants was David’s grandfather, himself an Eagle Scout.  Former Eagle Scouts and several current scouts gathered during that hot day in the beautiful Generoso Pope Foundation building in Tuckahoe to celebrate David’s special day of celebration.  In attendance were the faithful group of public officials:  Nita Lowey & Amy Paulin (NY State Congresswomen), Vito Pinto & Sheila Marcotte (Westchester County Legislators), John Fitzpatrick (Tuckahoe Village Mayor), Clare Goreman and Steve Ecklond (Tuckahoe Village Trusteees), Robert Forster (VFW), and Frank Morganthaler (American Legion).

David, like all of the scouts in our troop, has accomplished much during his youth scouting career and we are equally excited to see where his college studies at Holy Cross take him professionally.  Though less than 4% of all scouts ever attain the rank of Eagle, it is clearly not the ONLY yardstick of success in our troop.  Importantly, what the adult leaders of troop 353 are striving to create is a rich and varied program that provides ample opportunities for ALL scouts to learn about the world around them, how to lead others, how to make strong moral and ethical decisions, to serve their community and fellow scouts cheerfully and to lead a healthy life style.  Advancement per se is not a goal of the Scouting program.  It is along the unique scouting trail, that many, many experiences of a lifetime are created for our boys and I am very sure that David would vouch for the truthfulness of this statement as he reflects back on the richness of his special experience in Scouting!  Hats off to Mr. David Quigley, Eagle Scout!  More pictures of David’s uniquely “Green” Eagle Project and Eagle Court of Honor can be found here!

For the second consecutive summer, Troop 353 offered a high adventure trip option to its older scouts.  The August 2010 trip was to Pamlico Sea Base in the East Carolina Scout District.  The trip entailed a week of beach camping and kayaking along Cape Lookout National Seashore, culminating in the earning of the BSA 50-Miler Award.

The trip started with a flight to Raleigh, NC and a couple of hour van ride to reach the remote Pamlico Sea Base location on the east coast of North Carolina.  On the way, the scouts sampled genuine East Carolina BBQ at Parker’s Restaurant, a local favorite for decades.  Little did we know that this was to be the last quality meal the group would have for 6 days.

Our group was met at base camp by swarms of mosquitoes, along with the wonderful Pamlico Sea Base staff and our incredible trek guides Tony (hard to miss with his 12+ years of dreadlock growth and his unique ear décor) and Steve (who would come to be known as “the guide who doesn’t lie”).

The next morning, after gathering equipment and provisions, including a weeks worth of no-fuss foods (including Cliff bars, canned tuna, trail mix, granola bars, easy prep canned/boxed dinners and the ever popular summer sausage) the group was off on their adventure to the barrier islands that make up the lower part of the Outer Banks.

Day 1 proved to be easy, departing Harkers Island for the quick paddle over to the beautifully remote beach of the Shackleford Banks and the Cape Lookout Lighthouse.  Scouts enjoyed swimming in crystal clear waters (with the only inhabitants of the island – wild horses), hunting for conch shells and one of many beautiful sunsets.

Day 2 is when the group found out that sea kayaking differs from being pushed down a river.  Nine hours of paddling against rolling currents was enough to exhaust everyone.

Though a few hours of playing in the surf rejuvenated everyone a bit, dinner at Great Island that night was relatively quiet (and not very tasty).  One or two adult leaders consumed (more) Advil for dinner.

During the rest of the week, our group of toughened paddlers hugged the coastline, and followed dozens of duck blinds through the shallow waters of the Pamlico Sound.

Everyone got very much acquainted with their kayaks and mastered setting up tents in the wind and sand.  Each night we camped at a new destination beach, with each being more scenic than the last.

All got accustomed to the diet of trail mix, cliff bars, oatmeal to go and, of course, summer sausage.

It rained on a few nights, and we had an especially treacherous crossing of the Sound on Day 4 as we departed the beach at Long Point for Cedar Island just after a night of thunderstorms came to an end.   In order not to tip in the high swells, we paddled our kayaks non-stop for one and a half hours.

The trip across the Sound was well worth it as we were greeted by a rainbow and a group of dolphins (Did someone yell “Sharks!”?) on the far side.

We finished up our adventure with a 4-hour ferry ride and a well deserved night on Ocracoke Island, a popular tourist destination where Blackbeard the Pirate was reportedly killed in 1718.

Although Teeter’s campground was not 5-Star, it had showers and provided a great base camp for exploring the island and its great restaurants.  We got to sit down on chairs and relax.

It was a challenging, beautiful, awesome and memorable trip.  All participants were challenged both physically and mentally, and came away with a great sense of accomplishment and self-confidence.  We can’t wait for the next high adventure trip.

Tony, how much further?!!